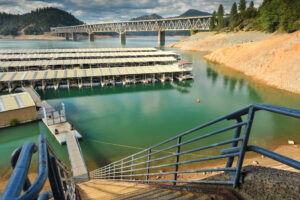 California or the “Golden State” is a place that’s known the world over for its incredible magnificence. That explains why so many people flock to it for vacations of all kinds. If you want to revel in the charms of California, you may want to head to Shasta Lake. What exactly is Shasta Lake? It’s right by both Shasta Lake reservoir and Shasta Dam. Both of these spaces are havens for visitors.

If you want to savor the getaway of a lifetime, then Shasta Lake may just be the ideal destination for you and for all the rest of the people in your party. The lake’s crystal blue waters are enchanting as can be. People can stare at them mesmerized for hours and hours on end. It’s also a sanctuary for outdoorsy people who are keen on outdoor recreational activities. If you’re all about boat rental and boating activities, then you won’t be able to turn away from Shasta Lake. It’s a terrific spot for people who simply want to hang out on marinas as well.

This massive reservoir is a biggie among people who are keen on houseboat rentals. If you want to take it easy inside of a vessel that’s both spacious and contemporary, Shasta Lake won’t let you down in the slightest. Hanging out on these houseboats can be an activity that’s soothing and energizing at the same time. If you rent a houseboat, you can have a blast with your friends and relatives. You can revel in conversations that are engaging and hilarious. You can exchange stories. You can play board games of all kinds. You can stare at the wonders of nature by you. You can nosh on tasty treats and meals. You can even consume the finest and most refreshing beverage choices around. There are no limitations for people who want to gaze at the bright blue skies that cover Shasta Lake and its vicinity.

If you’re enthusiastic about fishing as a pastime, then you won’t be able to resist spending some time on Shasta Lake. It makes a fine spot for people who want to secure bluegill, salmon, trout, sturgeon and beyond. It doesn’t matter if you’re a fan of warm water or cold water options. Shasta Lake won’t ever disappoint you. It’s a paradise for people who admire all different kinds of fish species.

What else makes this lake so breathtaking? It’s breathtaking due to the presence of its sparkling waters. It’s also breathtaking thanks to its nearby hiking trails, sizable caverns and waterfalls. If you adore nothing more than staring at moving water, you won’t be able to refuse the chance to hang out in Shasta Lake.

People who wish to take advantage of marinas that boast easygoing vibes may want to check out Holiday Harbor. It’s a big favorite among individuals who like to unwind. It’s a favorite among individuals who are interested in socializing with all of the others who are around them as well. If you want to have the time of your life in the Northern region of California, then Shasta Lake may be for you.