Best Marina to Rent a Houseboat on Shasta Lake

September 17, 2021 Posted Under: Marina No Comments

California has been one of the go-to destinations for vacationers for ages. This is mainly because of the numerous attractions spread all over the state. A visit to northern California will bring you to Shasta Lake, one of the most popular destinations in the region. Shasta Lake has a lot to offer in terms of recreation and other family fun activities. You can also find rental houseboats that bring a whole new experience to your vacation. Holiday Harbor is probably one of the Best Marinas to Rent a Houseboat on Shasta Lake. 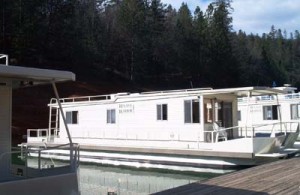 Holiday Harbor has its doors open to visitors every day from 8 am to 6:30 pm. As stated before, houseboats bring a unique experience to your vacation. Holiday Harbor is committed to giving its clients the best and most memorable experience on their visit to Shasta Lake.

Their boats are fully stocked and equipped with essentials, designed to boost your comfort and convenience. Aside from houseboats, the marina offers guests other services such as toy rentals. This way, you can broaden your itinerary on the lake with more fun activities. Aside from water sports, you can decide to relax and enjoy a day of fishing. Shasta Lake is home to trout, bluegill, salmon, bass, sturgeon, and crappie.

The diplomat is capable of sleeping a maximum of six adults comfortably. It also comes with several amenities. All of which include:
• One Bathroom and shower
• 3 Gaucho beds, capable of sleeping two people each
• A private room
• A propane fridge
• 75 HP outboard motor

This one is slightly larger than the diplomat and sleeps a maximum of ten. Some of the onboard amenities include:
• A bathroom fitted with a tub and shower
• 3 Gaucho beds
• A full double bunk bed that sleeps four
• One propane fridge
• Outside storage
• 140HP inboard/outboard motor

This boat is charged $715 for two nights and $1,089 for three nights during the off-season. The prices peak during summer when it’s charged at $1,734 and $1939 for two and three nights respectively.

This boat is charged $744 for two nights during the off-season and $1855 during summer.

Other houseboats offered by Holiday Harbor include the Marquis, the Grand Marquis, and the Empress. These three boats sleep 12, 14, and 16 adults comfortably and are fitted with Holiday Harbor’s best amenities.