Even though it is the middle of winter, it i 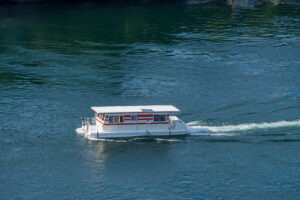 s not too early to start thinking about summer vacations. In the height of summer, nothing sounds better than diving into the cooling waters of a lake. If you are lucky enough to live in California, a visit to Shasta Lake is a bucket list item.

One of the main attractions to explore are houseboat rentals on Shasta Lake. An affordable and immersive experience, renting a houseboat allows you to explore every nook and cranny of this gem. When temperatures soar over 100° degrees and there is no relief in sight, sleeping on the cooling waters of Lake Shasta will seem like paradise.

Shasta Lake has more than 360 miles of shoreline, making it one of the largest lakes in the state. Impossible to do by car, renting a houseboat makes it possible to see the serene coastline and breathtaking views from wherever you please. You can drive your boat to any harbor or cove, making it the most adaptable vacation you have ever experienced.

Accessible via I-5, Shasta Lake is just outside of Redding. Tucked into the southside of Shasta-Trinity National Forest, the area is a quiet and undiscovered gem of Northern California. Shasta Lake is driving distance from the Bay Area and Sacramento, making it an enticing alternative to the more popular Lake Tahoe. Redding Airport also makes the area accessible to people looking to escape the oppressive heat and crowds of Southern California in the summer.

By renting a houseboat on Shasta Lake, you get the freedom to take control of your vacation, deciding where you want to go and what you want to do. There is the ability to fish, swim, waterski, wakeboard, and more. It’s an aquatic paradise for thrill-seekers and nature lovers alike. If you have never rented a houseboat before, then Shasta Lake is the best place to do so.

Largely considered the houseboating capital of the world, there is no shortage of options to choose from on Shasta Lake. Holiday Harbor has houseboats that can accommodate a romantic couples getaway, a small family vacation, birthday and wedding parties, and everything in between. There are many different types of boats to match your needs, allowing you to customize and plan your experience perfectly. Best yet, your hotel room is your transportation, so there is no double-dipping in expenses when you rent a houseboat.

Houseboats are comfortable and safe, combining all the trappings of a hotel room within the secure confines of a boat. Safety is paramount on houseboats, with enough lifeboats for every guest. And with beds and a kitchen, you do not even have to leave the water if you bring all your supplies with you.

Summer is peak rental season on Shasta Lake, typically running from the end of June to the beginning of August. Many rental companies offer reduced rates in the early spring and late fall, due to typically colder temperatures, if you are not too picky. Rentals typically go for at least a 2-night minimum, but if you are going to make the trip you might as well stay for a longer period.

Next time you are dreaming of summer, think about renting a houseboat from Holiday Harbor on Shasta Lake for an unforgettable experience.